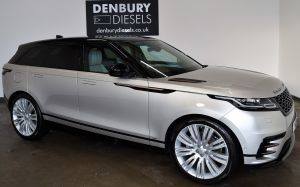 Hot Land Rover is due for launch with supercharged V8 engine

Land Rover is fast approaching the launch of an ultra-hot Range Rover Velar SVR model that it is producing to rival the BMW X6 M.

Using SVR’s ubiquitous supercharged 5.0-litre engine in identical form to the Range Rover Sport SVR‘s, the V8 brute is expected to have 542bhp and 502lb ft of torque on tap, enabling a 0-62mph time of around 4.2sec.

The model, which has been spotted testing in the West Midlands near Land Rover’s base this week, will go on sale in Britain from October.

Along with the performance powerplant under its nose, the aluminium-based Velar will receive a host of SVR weight-saving measures to bring its kerb weight down to about 1800kg. While still no featherweight, that would make it a significant 465kg lighter than the hottest X6.

SVR’s engineers are finalising the car’s chassis set-up, which has been tested at pace on the Nürburgring. The set-up will be headed by new performance settings for the car’s air suspension, including a harsher, more aggressive mode created for high-speed jaunts.

Beneath the camouflage, the spotted car’s rear bumper looks to have gained a diffuser between two new exhaust exits, and it also has new, lighter wheels.

Along with the BMW X6 M, the Jaguar F-Pace SVR, which is due on roads this June, will be a rival from the same stable as the Velar. That car is expected to get the same V8 but in more potent F-Type SVR specification, meaning it’ll produce 567bhp and be capable of 0-62mph in less than 4.0sec.

Despite their similarities, the SVR F-Pace and Velar models will focus on slightly different areas of the market, with the Jaguar prioritising on-road performance and the Velar retaining more of its off-road ability.

Pricing will likely start at around £90,000 for the Velar SVR, making it almost £10,000 cheaper than the larger Range Rover Sport SVR.